Love them or loathe them, Manchester City are demonstrating they are a cut above previous Premier League champions or should we say, champions-elect?

Barring a catastrophe, City should win the title at a canter, and they are on target to break a number of records this season. Furthermore, they have to be one of the favourites to lift the UEFA Champions League, such is their form in Europe in 2017-18.

The ease at which they beat Arsenal twice in a matter of days by 3-0, and then made Chelsea look thoroughly average, suggests nobody is going to stop City in the closing weeks of the campaign. They must be wondering how they allowed Wigan to turf them out of the FA Cup and ended any chance of a clean sweep.

The statistics, provided by CIES Football Observatory and InStat only underline just how dominant City have been since August. We should not be too surprised that a Pep Guardiola team has the best rate of possession (69.1%) in Europe.

Admittedly, all the league leaders in the big five, with the exception of Napoli, have 60%-plus, but their nearest challenger among the leading quintet of leagues is Paris St. Germain, a full 3.5 percentage points behind them. Given the Premier is arguably much stronger than Ligue 1 – and comparable to the Bundesliga – City’s possession rate is exceptional.

Nobody has had as many goal attempts as City, but their style has allowed opponents to take shots at goal around the penalty area. Their ratio of shots taken to conceded is 2.87, which is notably higher than Liverpool’s 2.2 and Tottenham’s 1.71.

City have netted 83 goals this season in the Premier League, scoring every 3.49 shots on goal. Only PSG have a comparable rate at 3.36 shots per goal.

Statistics can be made to prove anything, but one aspect of the CIES figures shows Real Madrid’s season has been lacking a bit of good fortune, apart from in the Champions League, that is. Not only are Real placed higher in terms of the shots attempted versus conceded ratio than their rivals, Barcelona, but Real’s attack produces more shots on target at 7.48 versus 7.04. Barca, however, are clearly better at keeping the ball (62.6% versus 58.1%) and scoring goals (70 versus 65). 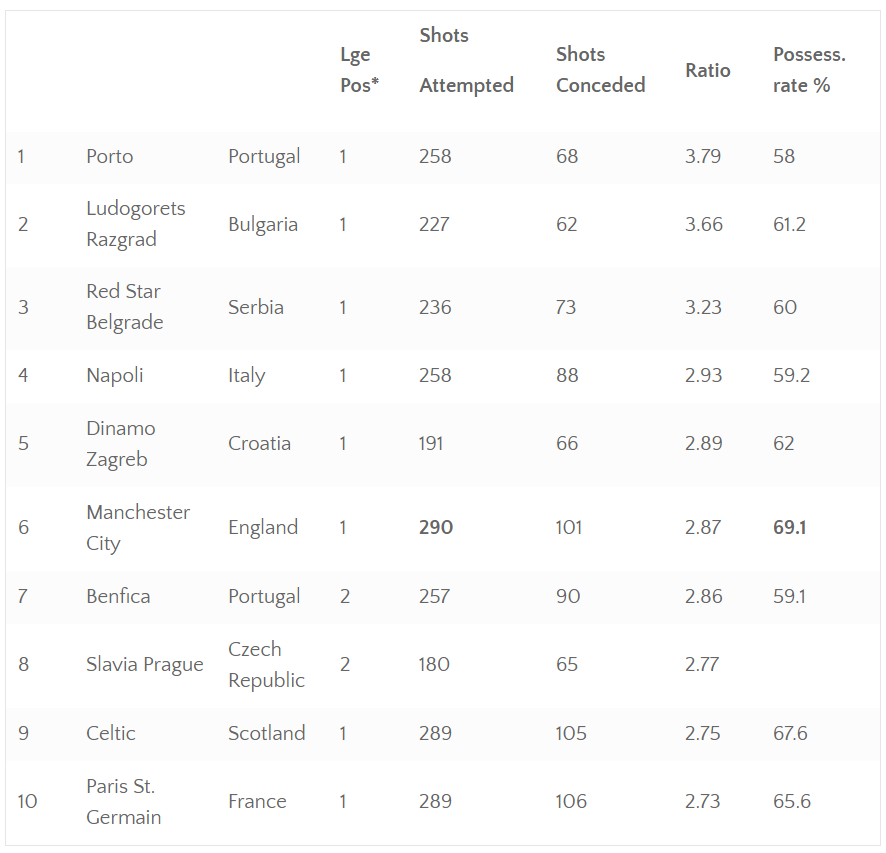 This article was originally published here at Game of the People. For more from Neil, follow him here.