Throughout the offseason thus far, I have tried to keep up with all that is new in the world of baseball — and much of that involves reading articles published on websites like ESPN and FanGraphs. Because it is the offseason, much of the coverage on these sites is about the value of players currently on the free-agent market. While opinions differ, FanGraphs, in particular, generally values free agents at $9 million per WAR. However, is one win at the major league level actually worth $9 million to the organization?

FanGraphs has arrived at the $9 million per WAR valuation based upon the contracts given to players on the free-agent market in recent years. Unlike organizations in other industries, sports franchises are often evaluated based on something other than dollars: wins. Consequently, the value of a win on the free-agent market may not necessarily correlate directly with an organization’s marginal revenue product (MRP), which, in the case of sports franchises, is the dollar value of a win to the organization’s bottom line.

In order to answer the aforementioned question, I collected revenue and regular-season win data for MLB organizations from 2001–2016, while also noting how far a major league team advanced in the playoffs, if at all, in each of the 16 seasons.

After standardizing for both season/inflation and team/market, I found that a team’s regular-season wins in a particular season do not have a statistically significant effect (at the 1%, 5%, or 10% level) on the revenue generated by the corresponding organization during that same season, other things equal. That being said, making it to the division series and winning the pennant in a given season are each worth roughly $35 million (in 2016 dollars) to the average organization in that same season, other things equal. Furthermore, having made it to the division series during the previous season increases the average organization’s revenue by roughly $15 million, while each win from the previous season adds roughly $1.2 million in revenue, other things equal.

Here is the regression I ran as proof: 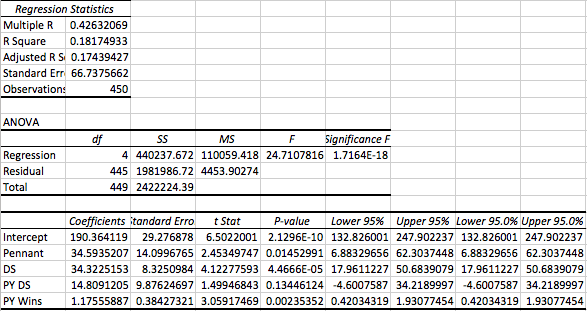 My research suggests that the Dodgers and the Astros earned roughly $70 million in 2017 for winning the pennant and will earn roughly $15 million in 2018 for having made it to the division series (AP/Getty).

Of course, the results from this analysis should not be viewed as cut-and-dry for every organization, but rather as a rough estimate for the industry as a whole. This analysis did not consider factors such as the market size or the placement within the “success cycle” of each organization. Nevertheless, the idea that wins are more valuable to playoff contenders may have some merit (and may also partly explain why the offseason hot stove has not been so hot). That being said, please take this with a grain of salt.

This article was originally published here at offthewallbaseball.com.