After Murray’s improbable and splendid 2016 campaign, which saw him chalk up 9 tour wins including a Slam and an Olympic Gold, most observers knew that gravity was always likely to set back in — but no one expected the Scot’s descent back to earth to be quite this abrupt and cruel. A new approach is needed if Murray is to return to the top, writes James Shaw.

It might very well seem like years, but it was only ten months ago that the Murray-Djokovic duopoly at the top of tennis appeared unshakable. Between them, they racked up 16 tour wins in 2016, and one half of the rivalry was present in every Grand Slam final. While Novak took the first two Majors of the year, Murray hit form in a big way after Roland Garros, securing his second Wimbledon title, an Olympic Gold medal in Rio, and a milestone victory at the World Tour Finals. With little idea how Federer and Nadal would play upon returning to the circuit (and with questions in the air surrounding Djokovic’s commitment to the game), it looked like the time had come for Murray to solidify his place as World No.1.

Since then, the two dominant players of 2016 have both struggled, and each has taken the decision to sit-out the remainder of the tour in 2017: The hip injury that has been plaguing Murray since June needs attention, and a prolonged departure from the game seems like the sensible option. The two-time Wimbledon Champion is set to return to the court in January, and will begin his 2018 campaign at the Brisbane International — a major coup for the ATP 250 tournament. Having played Brisbane in each of his Grand Slam years, the British No.1 is hoping that his decision to forgo the lucrative Qatar Open will set him on a path headed firmly to the Australian Open final. And this is precisely the right strategy for Murray — in 2018, his entire approach to the tour needs revolve around the majors. 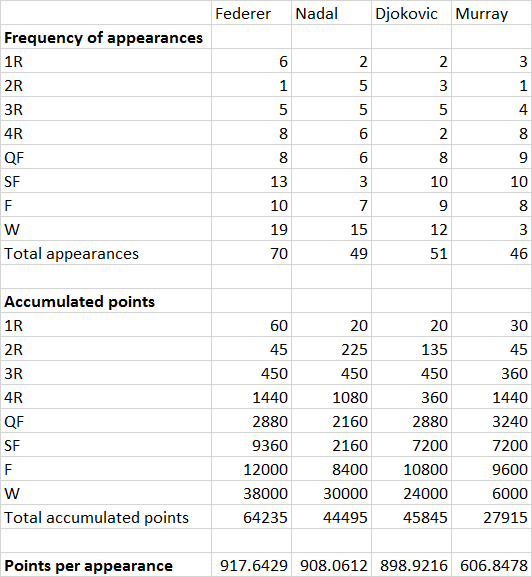 Murray’s status at the top of world tennis has long been a subject of debate. Despite being widely considered a member of the game’s elite “Big 4” (alongside Federer, Nadal, and Djokovic), a deeper look at the last ten years would suggest that there has been three categories at the top of the men’s game: (1) the Big 3, (2) Murray, and (3) everyone else.

The reason for this is that while Murray’s 45 career titles place him among the all-time greats of the game, his inability to consistently get past the reigning Big 3 in Slam finals is a black-mark on his record. Where Djokovic, Federer, and Nadal have each gotten the best of each other in the past, Murray has only managed to rack up a 34% win rate against his principal rivals — much lower than Federer’s 46%, but far superior to anyone else on tour. (There is a case for Murray’s inclusion in the Big 4, but that might be better left to another article).

The problem for Murray is that he risks becoming the LeBron James of Tennis — an all-time great talent who simply lacks the finals’ record to firmly silence any doubters. In much the same way as LeBron (who is 3-5 in NBA Finals to Murray’s 3-6 in Slam Finals), history has dealt the British No.1 a tough hand. Rising to prominence in the era of Federer, Nadal, and Djokovic has made his pursuit of Slams uncommonly difficult. One cannot help but wonder how many Majors the Scot could be expected to win if he were 25, and not 30.

But despite this rather gloomy appraisal of Murray’s career (which, let’s be honest, has been outstanding by any almost measure), his opaque legacy can be easily solidified provided he realigns his focus. Having won 14 Masters 1000 tournaments, two Olympic Golds, and the World Tour Finals — as well as having enjoyed a spell at World No.1 — Murray now needs to structure his season and training entirely around the events that will define his legacy: the Grand Slams. 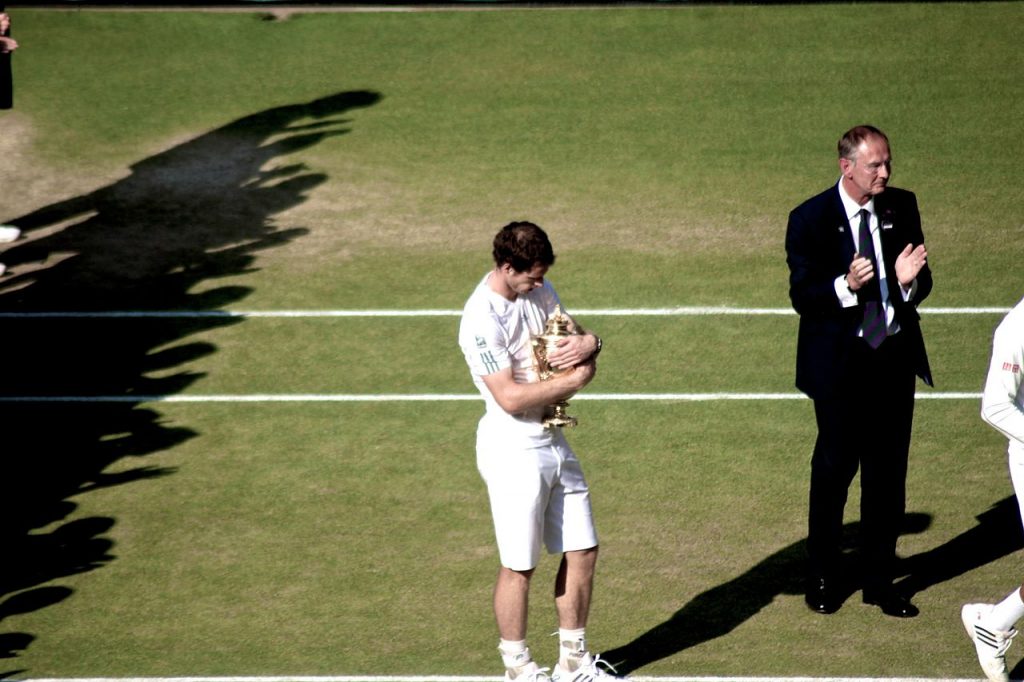 Murray holding the Wimbledon trophy after his straight-sets victory over Novak Djokovic in 2013.

Structuring a season around winnable-Slams involves making big, and sometimes unpopular, decisions. One of the keys to Federer’s success this year was his decision to skip the clay court season, effectively giving himself a two-month mid-season break. For Roger, Wimbledon was the “biggest goal”, and it should be no different for Murray. His best chances to win further Majors will come on grass and hard courts, and the clay season is only getting in his way. A repeat of 2016, in which Murray opted to play four clay court tournaments (including the French Open), would be the wrong approach for a player whose fatigue has produced frequent bouts of illness and that troublesome hip.

If Murray is to approach 2018 sensibly, he he would wise to limit his clay court schedule to just two events. Such a move would involve a change of mindset. During his time at the top of the game, Murray has developed a reputation as one of the most prolific players on tour.

The smart move for Murray is to structure his 2018 campaign around Wimbledon and Flushing Meadows. By win rate, the Scot is the third greatest grass court player of all time (85%) — better than Bjorn Borg and Novak Djokovic. And on hard courts, Murray is the third most successful active player with a 79% win rate.  If Murray is to play to his strengths in 2018, he should be looking to take to the court in no more than 15 tournaments, shaping his season around the build-ups to The Championships and the U.S. Open. This shouldn’t hurt his world ranking too much. In 2016, he managed to ascend to the summit of the game on the back of 17 tournaments, of which he won 9 with a 90% win rate.

Now in his thirties, Murray needs to emulate the “Federer approach”, picking the right tournaments and structuring his season around around his favoured Slams. If the Scot is to conclude his career with a record matching his talent, he needs to win two more Majors. Alongside his unprecedented collection of Olympic Golds, a record of five Grand Slam achievements would solidify Murray’s place as one of game’s all time greats — particularly when considered within the context of his hyper-competitive era. But if his is going to get there, it’s time for his team to adopt a new approach. Murray has to get smart. He has to be selective.