When you first start attending football matches regularly, you probably go to more home games for your team than away. The bulk of the people you meet, you walk past and you sit with are like-minded, wear the same colours and talk with the same accent. This changes a little as you get older, if you’re lucky enough to travel away.

I’m against the tribalism in football, but if you regularly attend away games, being one of a handful who sounds different, look different and are treated differently by police, you can understand how it can begin to feel as though it is ‘us against them’.

The first time I went to Carrow Road, I travelled with a friend and his dad. It’s a long way, Huddersfield to Norwich, and the most memorable part of the journey was a man in a lay-by vomiting into a shoe. The game itself was one of those routine hammerings Huddersfield got in East Anglia.

At that point, Norwich had made no impact on me except in knowing how far it was to get to and how long the A47 was.

The next time I went, I was with my mum and her partner. I felt like I knew the place a little, and we parked a little way from the ground. This meant we were able to walk down to Carrow Road along with the Norwich fans.

An accident of geography

At first, young me was a little bit put out by this. These yellow and green scarves, the funny voices, the certainty of which road would take them to the ground. These were Norwich people and I hated them. They were not us. Then we got to this wall. I remember how mossy it was, and I remember there was a chap in front of me who ran his hand along the top of it. A couple of steps behind, I did the same thing.

That shared experience, even though he didn’t realise, told me something, and I started to realise. I was having the same afternoon as him. I was walking the same path, I was going to the same place, I was going to sing the same songs (with a different name, maybe, but the same tunes). But for an accident of geography, I’d be a Norwich fan.

It opened a whole new door for me as an away supporter. I suddenly didn’t fear that full ground roar of a goal but began to almost relish it, knowing that those who visited Huddersfield would feel the same. I suddenly began to enjoy getting to the games, and meeting supporters almost as much as the matches themselves.

It was no longer us and them, it was a collective us, ‘we the people’. Football is only as good as its supporters is a line that is regularly trotted out, but ‘its supporters’ need to be both teams.

Sport is the people who play it, yes, but it is also the people who watch it and perhaps more so the latter because they carry the context within them.

Jim Laker was the Bobby Charlton of cricket

I watch a lot of cricket and became a Kent fan by osmosis (and geography). If these terms mean nothing to you, don’t worry, I think I can win you round. I attended a game last summer, a friendly between a Kent side made up of some of their first team players and some reserves and a touring West Indian team who were building up for a game against England.

Jim Laker is one of the finest English spinners in history. During the 1950s he was prolific, and his statistics are some of the most memorable in the game – to English people of a certain age, 10 for 53 and 19 for 90 are almost as familiar as nursery rhymes. If Denis Compton was the George Best of 1950s cricket, Jim Laker was its Bobby Charlton – a huge name in the game.

So, I was watching this Kent side behind a group of men who must have been in their 80s, sitting under the shade at Canterbury just before the lunch break. They’d told stories of the 1970s, of the 1930s (recounting things their fathers told them) and every decade before and since. I listened in, rapt, and I don’t know if my presence made them tell better and better stories, or if they’re as entertaining every week. I’ll creep back in this year to find out.

After a little while ear-wigging, Kent made a change in their bowling and brought on a young spin bowler, an interesting development. He bowled a few deliveries and one of these old chaps turned to his friends;

“Do you remember when we saw Jim Laker playing for Surrey seconds here?” he asked, as I racked my brain trying to remember Jim Laker’s action and match this unknown lad’s to it. Could this youngster resemble one of the most famous names in the game? Was this a ghostly call back to a match from some sixty years ago and more? Is this something wonderful?

“He reminds me of the lad who came on when Laker had finished.”

That piece of wall in Norwich gave me that realisation. It made me fall out of love with being a football fan, but fall in love with football.

If you’ll allow me a little self-indulgence, there’s something else about Norwich that I always remember, part of my sporting history – cricket again – that you won’t remember because you weren’t there. I was travelling to Norwich on September 12th, 2001, on the last day of Yorkshire’s match against Glamorgan at Scarborough.

Only one team you would ever tattoo

I was twenty-three years old at this point and had never seen Yorkshire win the County Championship. I’m a believer that you can support many teams in many sports, but there’s only ever one you’d have tattooed on you. You only have one team like that, and mine (as is the case with millions of Yorkshire folk) is the Yorkshire cricket team.

For Yorkshire to have gone that long without winning the title was as big an issue then as it was for Manchester Utd to have suffered a similar drought before 1993, or that Liverpool are suffering currently. Big teams, starved of success, giving envious looks to ‘lesser’ teams looking after our trophy for us.

When I talk about Yorkshire cricket, I always think of my Grandad. He wasn’t the stereotypical Yorkshireman, but he was a typical Yorkshireman; the county cricket club were as rooted in him as anyone and we talked for ages about who was the best players, the best teams and the best seasons. We talked often during 2001, though barely dared to think of the title. It had been too long.

My mum was driving me down to Norwich that balmy day and we pulled into a farm shop just outside of the city. I’d just been across picking up some leeks and moved across to the onions when I got a text. It took a while to open texts on the old phones, but when I did so, it told me Yorkshire had won. It might have meant the game, but it meant the championship.

I didn’t really know what to do, a combination of joy, relief and disbelief washed over me. In the end, I know I was stood outside the toilet blocks crying, but I’m not sure how I got there.

I felt I’d shared that victory with my Grandad, and silly as it seems, as he’s never been to that farm shop, and possibly didn’t go back to Norwich after World War II (though did once see a plane fly down the high street at pavement level) travelling there has always reminded me of him, and those times we spent together; human history intertwined with sport.

I had a quiet walk around the river on Easter Sunday morning reflecting on all the things Norwich means to me, before realising I needed to go back to that wall, to see it and remember how it had changed me all those years ago. 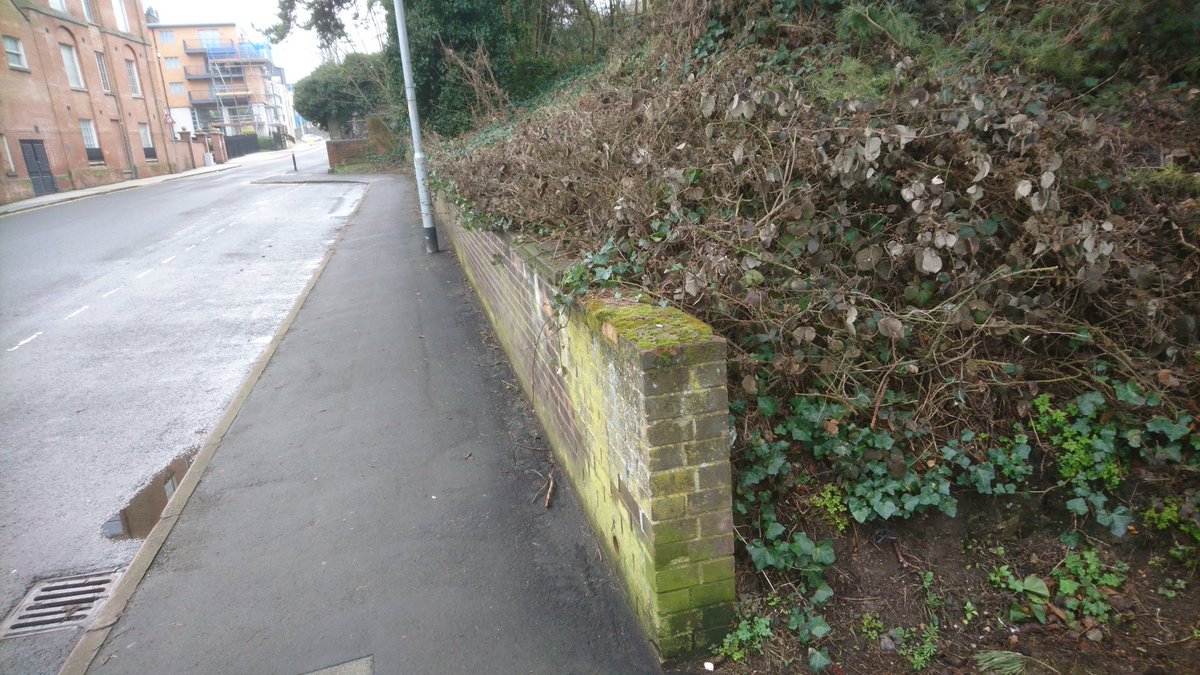