There’s a lot to love about Italian football, a lot to love and a lot to dislike. One of the things that sets Italy apart is its Ultras culture, those close knit groups of fans who have so much power within the clubs. They are a fundamental part of any match in Italy, and my trip to see Monopoli play Virtus Francavilla was no different; the Monopoli Ultras will raise their head from time to time, so expect them.

I set off to the game a little uncertain of myself, and slightly concerned I would need my passport to get into the stadium. As it was, I ended up following a chap in a green vest to the game, he joined up with his group as we approached the stadium, and it turned out he was one of the bigger names in the Curva Nord group.

This became apparent as we turned a corner and he joined a group of twenty five or so who were chanting their way through the outskirts of town to the stadium. It took me a while on arrival to find the ticker office, three tiny holes cut into a wall. I had, both there, and on the way into the stadium, to present my passport. These facts speak of the problems with violence Italian football has had, though I saw no sign of anything like that.

Monopoli to Serie B?

This season represents a good one for Monopoli. They are tidily ensconced within the playoff zone and while the day’s opponents, Virtus Francavilla, are a couple of spots back, there is points between. Promotion would take Monopoli to Serie B, a level they have never reached, though they will have to navigate a fairly circuitous route through Italy’s convoluted playoffs in order to do so. Virtus Francavilla, it must be noted, had brought a few fans over the hour drive and they let their large blue flags flutter throughout. If you were to take that journey, you might do better popping in to Locorotondo on the way; they produce a fine wins that does not move well outside the region.

About an hour before the game was to start, the Ultras started to set things up. The stands were near enough empty at this point, but when I reached them, there were drums at the front, a speaker turned towards the stand and a clearly marked section in the middle of the stand. Both it, and the area either side filled up as the evening sun continued to beat down. More appeared over the hour, flags, banners and a lot of canisters lined up at the front. 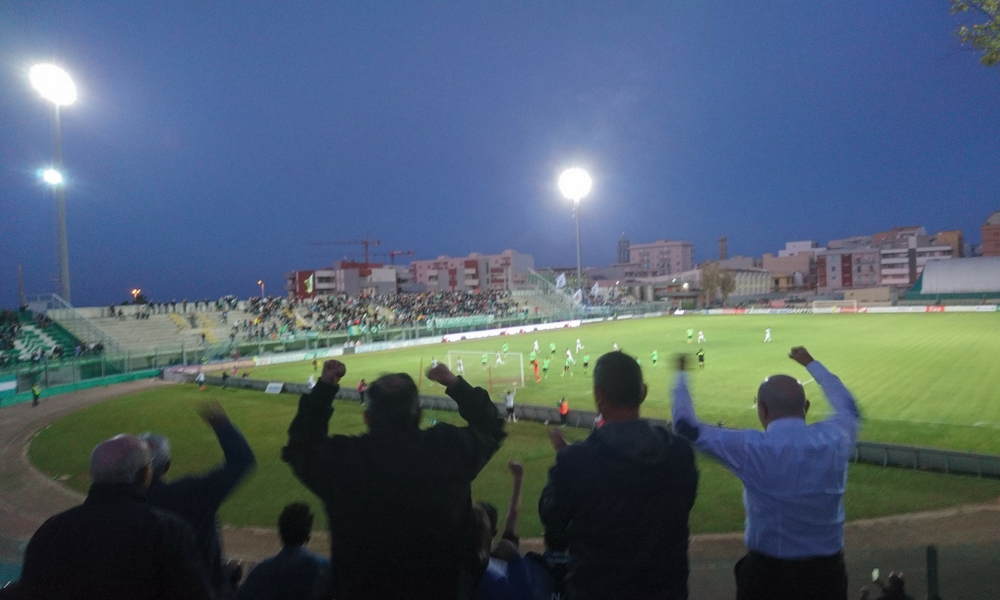 By the time kickoff rolled around, there must have been a couple of thousand in the ground, and the sides were decently packed with people. Increasingly, couples turned up together; they sat to the side and in one case brought a little towel to protect themselves from sitting directly on the stand. If you will wear black jeans….

As the teams were about to come out, I noticed a chap who was obviously one of the leaders of the Ultras waving my section of the stand away. He was shouting something, and gesturing us to move left. He went ignored.

A few minutes later the canisters were released, sending plumes of thick green, white and black smoke into the air. At first it was atmospheric, then it was visually impairing and finally it was unpleasant and disorientating, and the spaces around me emptied with coughing and spluttering people. Yet we were warned, and failed to heed it.

The match itself got off to something of a slow start, neither side showing much quality. Virtus Francavilla had the better of the early exchanges, largely because they were able to win the ball quite a way up the field, Monopoli left back Mario Mercadante having been selected, seemingly, for his size rather than any guile.

That accusation could be levelled at a lot of defenders on either side. None seemed to have the foresight of positioning that would allow them to quell nascent attacks, rather reacted to what came at them, often physically – there was a lot of free kicks.

As the visitors impetus faded, their gameplan of going wide and trying to cross in began to fade, a hero emerged dressed in white. Monopoli usually wear green, but were in white on Sunday, and number 13, Dimitris Sounas, deserved every molecule of its brilliance.
One thing I’ve always enjoyed about seeing teams I don’t know is the players who surprise. Either they’re well known but forgotten (Julian Joachim at Boston Utd again), sometimes they’re a whole new revelation. Sounas was the latter. With his socks low, Steve Claridge style, he floated between Monopoli’s midfield and attack, linking the two, but providing so much more.

Every attack went through him, as though his flick, his touch, was it’s verification. He would backheel, he would juggle, he would find space where there was none, he could dribble beyond players as though passing through them, all the while his socks rolled down.
It is high praise, but his game, such was his delicate majesty, had something of the Baggio to it. Or at least it did until midway through the second half when he hacked down a Virtus Francavilla player with such vim it was as if he had thought he was a tree. He was booked, correctly.

For all Sounas had every trick in the book, he had neglected to let him teammates read it, so all his prompting, during a first half Monopoli grew into and eventually dominated, and a second half that they bossed from the off came to nought.

The second half became increasingly bad-tempered, a symphony of late tackles, cynical fouls and accidental comings together. I have to admit that I felt Monopoli had a couple of decent penalty shouts, but my view was not so good as to shout the word ‘Bastardo’ let alone kick the wall behind me in anger.

Through all of this upset, the Curva Nord Ultras kept singing, bouncing, clapping and saluting. They were right behind their team, and they believed. And then something unexpected happened (unexpected to me anyway). With around an hour of the game gone, still 0-0, they unfurled a pair of banners that read ‘Benvenuto Federico, piccolo ultra AKM’. It became apparent that Federico was the baby of one of their members and when their Benvenuto Fredi’ chant began, it was the most widely joined in of the evening. Not everyone is an Ultra, but everyone is family.

Eventually, Monopoli wore their guests down. Given the game, it was perhaps inevitable that it was a mental lapse rather than a moment of magic that brought the goal. A Sounas free kick looked to have gone too far, but Stefano Pino put up a hand to meet it. The referee, bastardo that he was, pointed to the spot and Giuseppe Genchi drilled it home. 1-0 to Monopoli. Game over, we thought.
The last minutes were supposed to be a parade, the Ultras enjoying their evening in the dying light, a few bat’s visiting the stadium from a nearby tree and an elderly man finally lighting a cigarette that he’d been holding in his mouth, while talking, for the best part of quarter of an hour.

Then, with five minutes to go, it all went wrong. Looking to go forward again, Monopoli were caught short, and Virtus Francavilla surged forward outnumbering them two to one. At the perfect moment, the ball was rolled across to Anthony Partition who rifled it low into the net. The visitors went wild, the Ultras felt silent and what was a pleasant evening felt a mite colder.

A good introduction to life

The remaining five minutes saw Monopoli trying and failing either to score or to win a penalty. Sounas had a great chance, with just a few seconds left on the clock. When his moment came, he rolled it meekly into the goalkeeper’s hands. It ended 1-1, and both teams live to fight for the playoffs another day.

For baby Federico, it was perhaps a good introduction to life. Things can go right and enjoy them when they do, and things can go wrong, and when they do, do your best to recover, you’ll have support around you as you put it right. Its a lesson we all need from time to time, for we are all Federico once, and we are all Monopoli often.

May he have more joys than sorrows, and may Monopoli play so well and get their rewards in future. Forza Gabbiani!